vibe out and watch the default unity sunset

there's an archetypal story that's passed around and retold in the oral history of game developers. it's about a developer who tries for years to make a single game, but keeps failing. until one day, they discover one cool trick that changes their lives

I made my first real videogame in 2019. i'd made games before in programming classes and game-making classes, but those weren't games i designed myself, that i had full creative control over.

i'd spent the last two years working on my first solo project. It was a cooperative sidescroller beat-em-up, like Castle Crashers meets Overwatch. after two years, all i had to show was some gray squares running around on a concrete background.

i was frustrated that i couldn't make a game by myself. i hadn't really enjoyed working in groups, and had this dream of making my own game, my own art. i looked around and saw that other people could make solo games, but they seemed to have a lot more discipline or talent than me or something. and even then, it took them years. i get bored of an idea long before "years"

i came across PICO-8, in early 2019. I think i heard about it from this talk (we're going full circle). that talk and this one enticed me to try to make a game in one week, and i decided to try with PICO-8. and i did it and it was great and i learned a lot etc.

that was a pretty magical and life-changing experience for me. and since then i've been obsessed with game-making tools, especially small tools for making small games. central to PICO-8's ethos and design is the idea that it should help the developer prototype ideas quickly. turns out that this idea of tool-as-creative-partner is present in many tools. there is in fact whole communitys and movements (and research being done around) trying to make videogame developing easier and more accessible for everyone

so i've been interested for a couple years now in game-making tool design (or creative software tools in general). and eventually i started to think about Unity, the industry standard for game development. there's a lot to be said about how Unity helps or hurts making certain types of games. but one thing in particular is this idea of a "almost blank page" that Kate Compton talks about in their dissertation

Compton noticed that in many of the tools they analyzed, the tools would start with something already there. for example for a character creator, there's some default person there to start with as a jumping off point. the idea is that this is more inviting to the artist, that helps get them past the initial writer's block or activation energy hump so that they can start creating

game making tools all have their own starting canvas. bitsy famously starts with a default player and cat. and over time, the bitsy community has adopted these defaults to be emblematic of the tool and of their community. the cat has become the bitsy mascot. the default player sprite is used widely in bitsy games. using the defaults of the tool is frowned upon in Unity (e.g. there is a class at NYU whose curriculum includes a lecture that is dedicated to seeking out and changing these defaults). but in smaller tools, the defaults are celebrated. they are a soft constraint, and together with harder constraints, like the low resolution and limited color palette, form a sort of aesthetic that may be part of the reason that these tools have become successful

when you see a bitsy game or a pico 8 game, you can tell just by looking at it, and also by the way it plays, and the sound (or lack there of). i started to think about, what is the analog of that in Unity? what is Unity's "grain"? it's weird because, unlike these other tools, Unity is not designed for you to stay in the tool. you're supposed to leave and mkae visuals and audio in other tools, and then come back and collage them together in Unity. additionally, Unity's design strives for an ideal of letting you make "any type of game". there's no constraint on for example, character movement like bitsy's grid. Unity is designed to be invisible

but still, I wanted to try to celebrate the defaults in Unity. I noticed that the default sun/directional light in Unity can be rotated, and that doing so produces this very pretty sunset. you get that for free!

This was a very nice read and you made me open a bunch of tabs that I will stay open until they are read :)

What's your relationship to working in groups/alone now?

i'd say it's changed over the last couple of years. before i was pretty cynical about working in groups--my first few experiences were pretty bad or meh compared to working on my own. but I've had some wonderful experiences collaborating now. i still need to have something that i'm working on something by myself but i also really enjoy working with the right people

really in love with this. reminds me of slow cinema where the harsh constraints of time and movement give you permission to focus on all the subtle changes of a scene. it's actually something i've been wondering how to capture in games where any sort of subtle flourishes tend to require hand-crafted finesse (which is a lot of time to make as a developer). but the minimalism of this really strips away the noise, so i can just take in the gentle nuances of the slowly changing light. beautiful game <3

that's so nice thank you. happy you enjoyed it :) 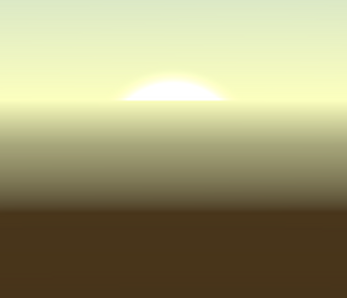