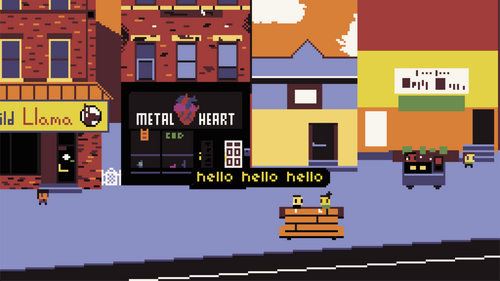 all those quotes are because the game isn't done. not nearly. it's still very much a prototype/proof-of-concept. the idea, visual aesthetics, and core systems/rules are pretty much there. but there's very little actual content/things to do. some of it is flagrantly broken. i think there's a bug where you can only sit at the table ONCE. if you stand up and want to sit back down, you can't. sorry. that just isn't allowed in this universe. and there is no audio. at all

technical shit (aka how did you make this)

the game was made with Godot 3.1. i used GDscript exclusively. i used Aseprite for all the visual assets.  the font is the lovely 04b03. all the source and assets are here.

there were some interesting technical things i ran into while making it. i probably wasted about 3 man-weeks trying to port yarnspinner to GDScript. maybe i'll write more about that stuff in some later posts

personal shit (aka why are you releasing a broken game)

i'm publishing the game because i don't know when the next time i'll be able to work on it will be. i'm gonna be pretty busy the next couple of months, and then it'll be December, and who the fuck knows what my priorities will be then. i started working on this in June 2019 because I knew I was moving and leaving this beautiful neighborhood that means a lot to me. it was a moment of my life where I felt like i needed to make this. it's a game about  how much i love Pittsburgh, and especially in the summer. by the time i have time,  i'll be living in Brooklyn in the dead of winter. maybe i'll still be in love with this game and be motivated to finish it, but maybe not.

it makes me super sad to release it in this state. i spent so much time prototyping/iterating on the core design to get it to a point where i felt comfortable starting to make the actual game, and now i feel like i ran out of time to realize the vision i had. hopefully i'll learn something from this about scoping or whatever. i used to think "killing your baby" was excessively gory and borne from edge-lord gamedev culture, but now i get it. this sucks

but it would suck even more to maybe never release it. i want people to see and experience it. even though it's broken, i'm very proud of it. it's the best thing i've ever made. and if i don't put it out, it'll just hang out in the back of my mind taunting me to finish it like that annoying warlock imp from WoW, and i won't have the time to deal with it.

so i'm putting it out there. i hope people can enjoy it for what it is! reading back what i've written, it feels more sad than i intended lol. i'm excited for people to try this thing out. let me know what you think!

THANK YOU TO PLAYTESTERS AT THE PLAYTEST EVENTS HOSTED BY BIT BRIDGE, WONDERVILLE AND NYU GAME CENTER. YOUR FEEDBACK WAS INVALUABLE

Get a summer afternoon in bloomfield

a summer afternoon in bloomfield

a love letter to the neighborhood